A long weekend in Romania left me pondering the nature of time and history, and our place in it. 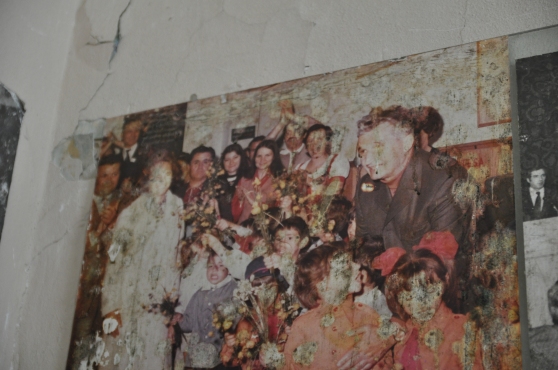 I should start by saying that I’m fully aware a long weekend in any country could barely provide a rough sketch – let alone a full picture – of a nation’s culture, history, environment and people. And yet the feeling I took away from five days in Romania was a glimpse not only of that country’s history, but of the nature of history and of the transience of time itself.

That might sound over the top, but what’s the point of travel if not to build on your ideas about the world, and to shift the foundations beneath your feet just a bit?

We started our Easter long weekend sojourn with Paul’s family in the city of Timișoara in western Romania – one of Romania’s largest cities, and the place where the revolution started on 16 December 1989 (it finished with the execution of Ceausescu and his wife a little over a week later, after 42 years of communist rule).

In Timișoara, we visited a museum of the revolution in an old building, which showcases a piece of the Berlin wall at its entrance. One of the first things that caught my attention entering the building was the concrete staircase, eroded and polished from a century of use – including, among other things, as a military barracks before becoming a museum. (When we asked a staff member about the building’s history, he said drolly that its function might yet change again if the situation in Ukraine accelerates.)

We sat quietly through a documentary about the revolution, in a room wallpapered with posters and propaganda from the communist era – throughout which I couldn’t help imagine the stairs outside trodden with 1940s soldiers’ boots, then the adrenaline-fuelled feet of panicked or angry (or both) civilians from that infamous week in 1989, and now replaced with made-in-China sneakers of a lone group of Australian tourists on a quiet, unseasonably cold spring day in 2015. 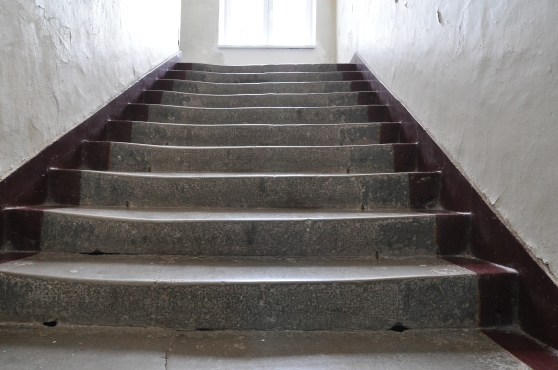 Before the museum, we’d visited Timișoara’s orthodox cathedral with its magnificent gilded chandeliers that look more like floating castles.

However it was only after watching the revolution documentary that I learned of the cathedral’s role as the site of the beginning of the revolution, as well as a place where people sheltered during the fighting, and outside of which thousands eventually knelt and lit candles for the dead. And so, only in hindsight could I wonder what memories or faces must have been in the minds of the people who gathered there during our visit. 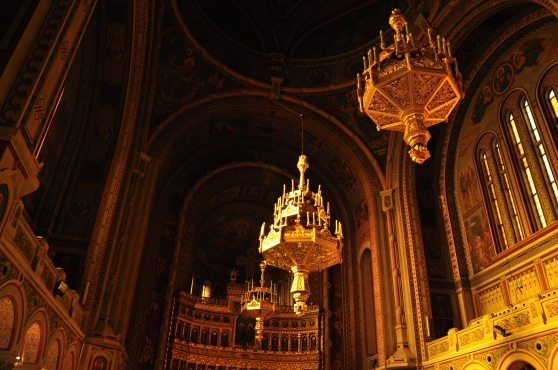 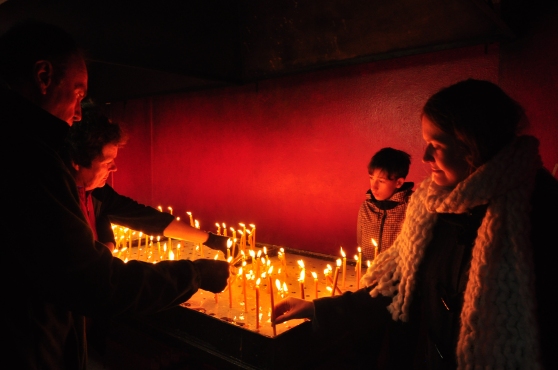 Later on, we visited Roman ruins in Sarmizegetusa (we were tested on pronunciation by our patient guide, generous host and brother-in-law, Radu). By now I’ve visited several sites of Roman ruins around Europe, and yet these crumbling ornate stone structures with ancient Latin insignia of a long-lost civilisation buried beneath our feet never lose their power.

However, if the sight of those ruins emerging out of the grassy hills might have given me the impression that history is anything but continuous, I only needed to visit our next stop – a small medieval Catholic church, built perhaps a thousand years after the Romans, using pilfered pylons and stonework from the same ruins we’d just wandered through.

This centuries-old church was not only built with the materials of an even more ancient history, it also held evidence of its future. Rather creepily (no matter your religious or cultural affiliation) the eyes of all of the wall art – mostly murals of various saints and Jesus and Mary – had been scratched out of the stone in some sort of historic persecution of Catholics. Later my sister-in-law Angie also spotted a scratching in the wall (a kind of ‘X was here’) from the late 1800s – made when the church was already ancient, and yet old enough itself to join the ranks of historic interest, which is a fascinating idea in itself. 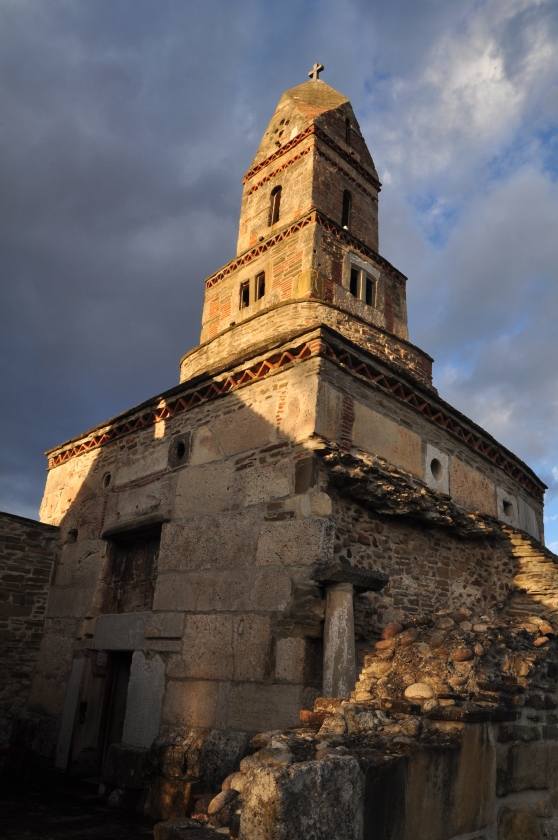 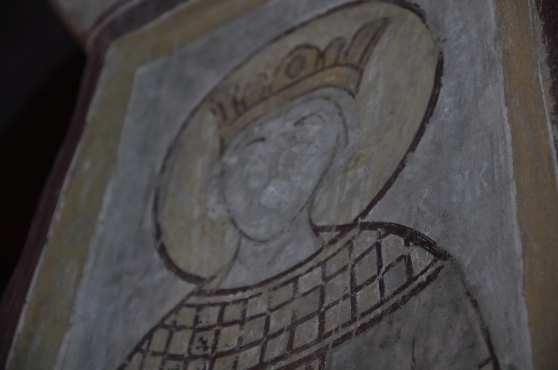 We would spend the next couple of days in the countryside with Radu’s kind and generous family, managing through translation and body language to communicate fairly comfortably, and to laugh a lot. The home-made ţuică (a knock-your-socks-off home distilled spirit made from apples) no doubt helped to that end.

To add more context to my meandering thoughts on the nature of time and history, we visited a local breeding program that is trying to save the critically endangered European bison.

These beasts roamed the wilderness throughout Europe long before we came along with our cathedrals and revolutions and travel blogs, but have since (along with much of their habitat) been pushed to the brink of extinction. Scientists and conservationists have had some success in growing their numbers in recent years and hope to reintroduce a population into the wild in Romania, but the species remains rarer than the Black Rhino.

Another day, despite the unexpected spring snow, we managed to steal a couple of hours wandering through a beautiful beech forest in the southern Carpathian Mountains – where grumbling water pipes and airplane engines had us baulking at bear-shadows.

The bison experience and the rare opportunity to spend time in real wilderness on the European continent was a good reminder that history does not belong to humans – like the Romans, and the person who scratched their name into the wall of that Catholic church 100 years ago and the communist dictators of the twentieth century – we are all only passing through. 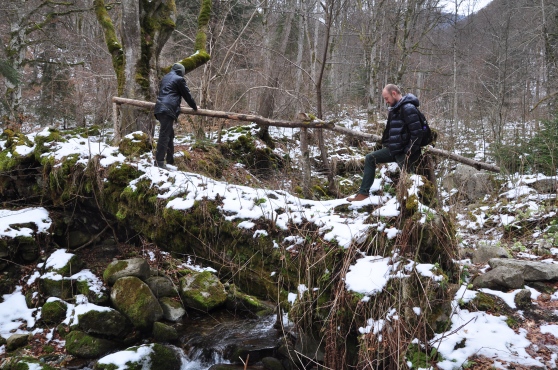 Before our flight back to London, we toured the centuries-old Corvin Castle in Hunedoara, where we competed with hordes of young smartphone-wielding, brightly dressed school children as we wandered the halls beneath soaring stone ceilings, read stories of torture chambers and bloody battles – and gazed out through crumbling stone windows onto crumbling communist structures and out to the snow-covered Carpathians in the distance.

We joked about scratching our very un-Romanian names onto the wall to confuse some future historian, but settled with being observers this time – although no less a part of the story of Romania’s history now, even if just a footnote.