Sometimes you simply have to drop everything and head for the wilderness – even if just for overnight. Nowadays the buzzword for it is ‘microadventure’; whatever you want to call it, it’s often just the escape needed to reinvigorate the soul and whet your appetite for the next big adventure.

It all started with an email to Paul in the middle of the work day on Thursday. The week had already been wonderfully abbreviated, thanks to a visit on Tuesday from our friends Caitlin and Tim from the USA (who reminded us that we should still be tourists in our own town while we can – and that there’s still so much to see and enjoy). Our tent has also recently been repaired after we killed it in Iceland, and so the one-liner email I sent Paul read: “How does whiskey and cards under the stars in Exmoor National Park sound this weekend?” I really didn’t have to twist his arm.

So, on Saturday morning we packed our bags and drove an hour to Lynton, where we forked out £15 for a good topographical map of the adjacent national park, then set off on foot out of the village of Malmsmead, loaded up with camping gear and food (and of course a deck of cards and a flask of whiskey), with a rough idea of where we wanted to explore and eventually sleep the night (Doone Country sounded pretty apt). 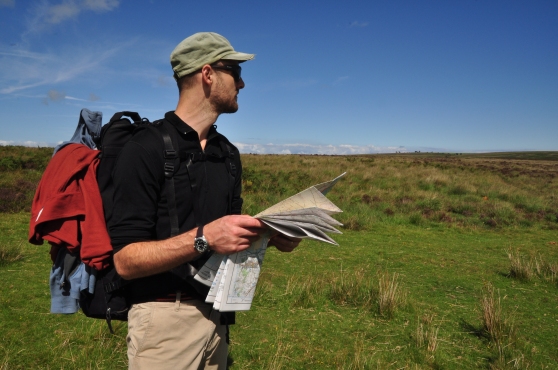 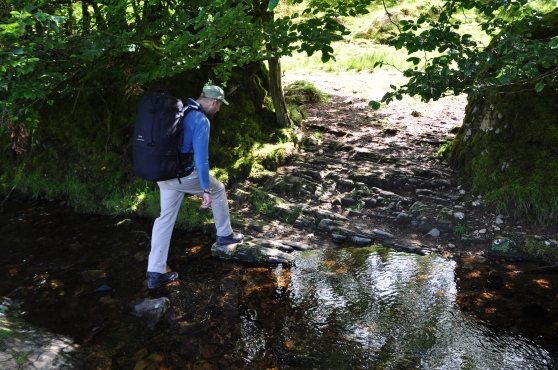 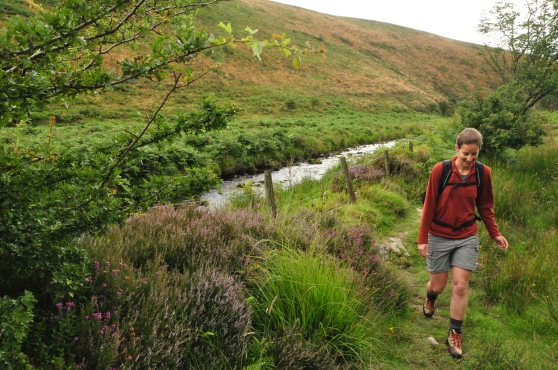 Unfortunately for Paul, I have an almost uncontrollable urge to make Game of Thrones references when exploring the moorlands and the English countryside. The surroundings are such that I keep waiting for Arya Stark and the Hound to round the next corner on horseback.

We made our way past ancient stone walls, gnarly old oak and ash trees, hopped over bubbling streams and climbed rolling green hills until we made it to the open expanse of moorland. Another inspiration for the trip had been Exmoor’s designation as a ‘Dark Sky Reserve’, with minimal light pollution and therefore offering excellent star-gazing potential. As we trudged across the endless heath and grasslands, it was easy to imagine how dark it would get come nightfall.

Eventually we made it to a back road that cuts through the national park, where we were surprised to find about a dozen four-wheel drives and horse trailers and distinctly dressed locals – all of which added up to suggest we’d stumbled across the makings of a fox hunt, as Paul pointed out. Indeed, as we found the next part of our hike back onto the moors, we did see one pretty agitated and flighty looking fox dart across the track and away, in between the disinterested cows chewing their cuds. (The look the cows gave us said, “We won’t tell them he went this way if you don’t.”) 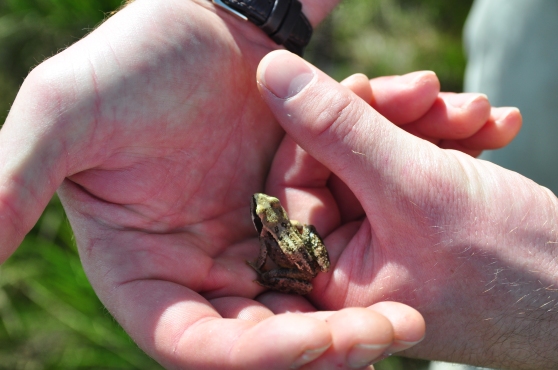 The aim of the game, of course, was finding the perfect campsite, and on this front I must say we did pretty well. We were heading towards a more protected valley, and as we crested yet another hill, paradise revealed itself below. A wide, clear freshwater stream, hillsides carpeted with purple heath and golden grasses that shimmered in the breeze, twisted, lichen-covered trees with short green grass around their base, perfect for pitching the tent.

The last time we camped was in the back yard of an old pub when we first arrived in England with nowhere else to stay. Before that, about a year ago now, we spent 35 nights straight in this tent, and so clipping the poles into place again felt a bit like a home-coming. 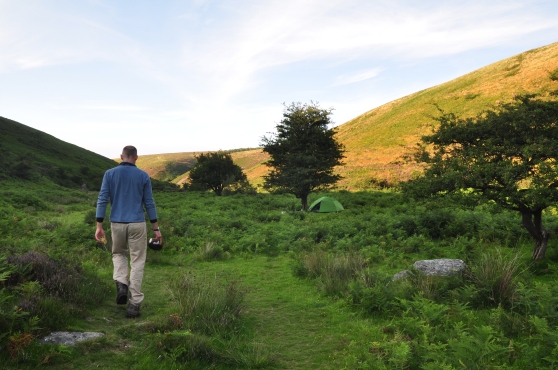 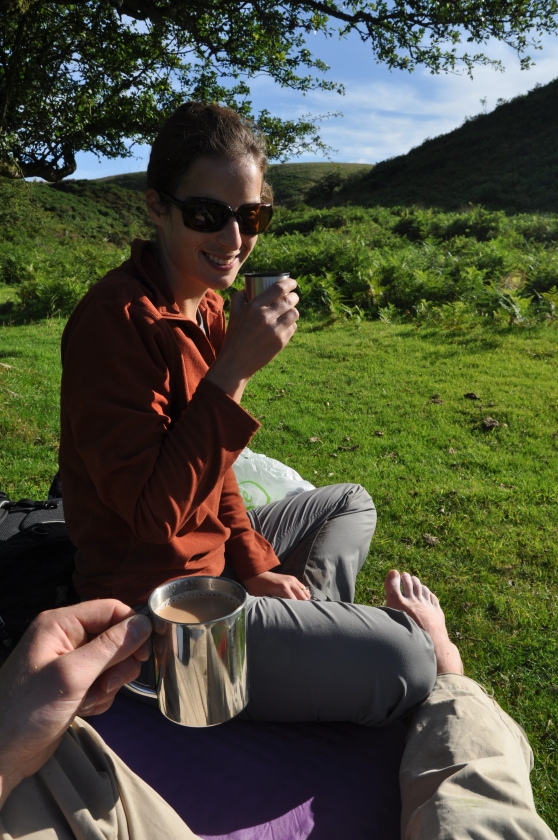 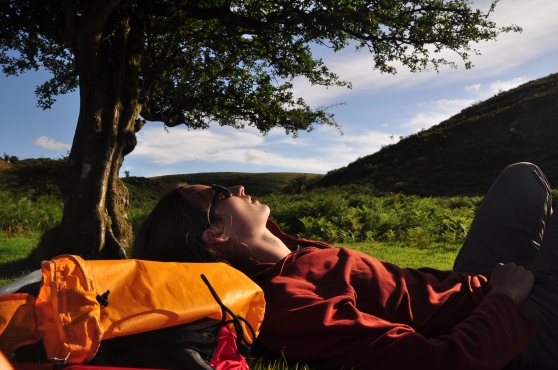 And then what we really came for…

Alas, as the sun set, Doone Country lived up to its name (sorry history buffs and Lorna Doone fans) and appeared to pull a big, soft looking doona of clouds across the sky above us, so star gazing would have to wait until next time. (I always like an excuse to return, anyway).

The cloud hung around the next morning for our hike back, and if anything it made the scenery even more otherworldly; the brilliant greens even richer. This landscape truly is the stuff of fantasy (or even video games, it occurred to me; if this isn’t Game of Thrones country, it could easily be Zelda, and I could almost hear the sound track change with the rising sun of a new day.) 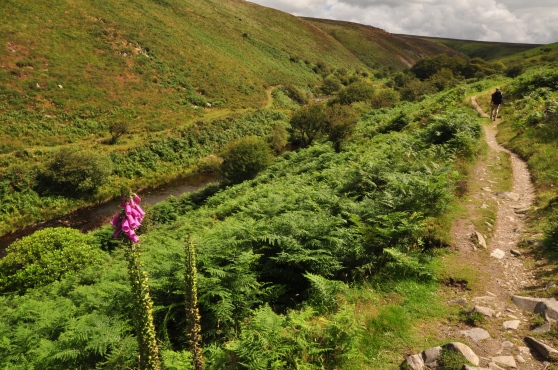 After all that, we enjoyed a well-earned treat in Lynmouth, and we finally managed to get an action shot of our much-loved Land Rover. We were home in time to spend Sunday afternoon writing this up, now it’s back to work on Monday. 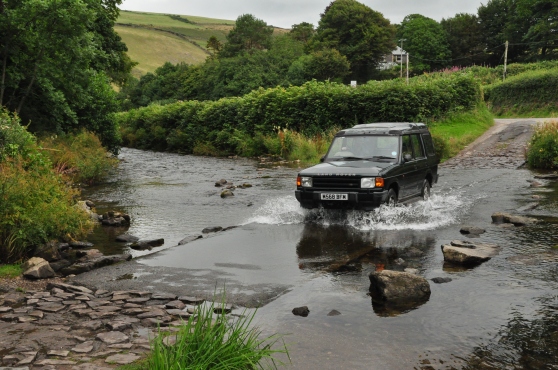