In hindsight, when ordering a meal to be eaten at a table for one in a large swanky dining room, I should probably have gone for a less messy option than the mussels… 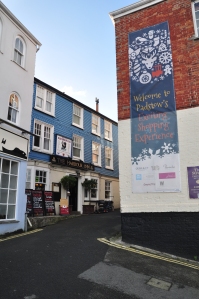 As I’d chosen to eat early that evening on my overnight stay at the St Moritz Hotel in Rock, north Cornwall, the restaurant was mostly empty and I couldn’t help but feel the waiters’ eyes on me as I wrestled with the tasty but stubborn mussels in their fragrant coconut and coriander broth… My previous confidence that yes I’m sure you’re supposed to eat these with your hands and use the first shell to extract the rest of the little suckers was fast waning, but I was in too deep by then to reach for the fork, so my only option was to look confident, whilst occasionally smiling reassuringly over at the attentive row of waiters as I attempted to proceed to the next page of my touch-screen e-book using the knuckle of my pinkie finger. 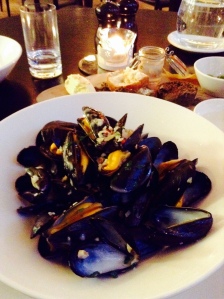 The situation brought a scene in Sylvia Plath’s The Bell Jar to mind –when her character Esther Greenwood mistakenly consumes the entire finger bowl at a luncheon “including the crisp little blossoms”. Esther came to learn that when you think you’re doing something incorrect in a dining situation, just do it with “a certain arrogance […] and nobody will think you are bad mannered or poorly brought up. They will think you are original and very witty.” So, in short, that’s the effect I was going for – and after a glass of South African sauv blanc and finished off with a warm, spicy mulled wine, I was starting to feel pretty merry and confident again anyway.

The reason I was down in Cornwall was for a two-day work trip to attend the first half of the annual, four-day Padstow Christmas Festival. My employer was invited by one of their clients, Sharp’s Brewery, who was putting staff up at the St Moritz Hotel – which happens to be another client and one who I work with directly, so I was lucky enough to be sent along. 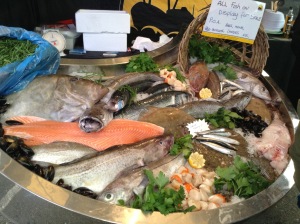 It’s a two-hour drive down the coast from North Devon through winding, narrow country lanes (saying that, even the A-roads here feel like narrow lanes to me…), and I arrived at around 11am to check in at the hotel then make my way down to the little ferry that crosses the Camel Estuary between the towns of Rock and Padstow – it will drop you off at different points along the beach or harbour depending on the tide.

The centrepoint of the festival was a big marquee set up with food stalls and craft and Christmas gifts, and of course beer – Sharp’s Brewery was the main sponsor of the event. Highlights were the Chefs Demonstration Theatre, where some of Padstow’s best chefs – including Rick Stein who many joke more or less owns Padstow (he certainly put it on the map) – cooked meals on stage for the audience to watch and learn. Among my personal favourites was the eccentric moustachioed Hugo Woolley who restored my faith in my own prospects as a home-baker when he’d been given the wrong flour and his granola cookies turned into a buttery mess in the oven – it happens to the best of us! 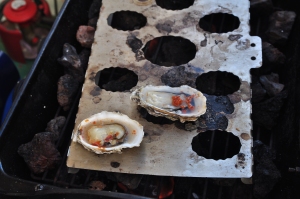 The next day I was lucky enough to sit down for coffee at Rick Stein’s The Seafood Restaurant to interview former Michelin-starred chef Paul Ripley (Paul was head chef at The Seafood Restaurant after Rick and now works at The Mariners Rock pub), as well as his sous-chef Zack Hawke and Sharp’s Brewery’s beer sommelier Ed Hughes – Ed is passionately trying to elevate beer to the world of fine dining, which is a noble cause, I say.

Sharp’s Brewery also had a clever marketing trick up their sleeve with something called The Secret Bar that took place inside a closed shipping container at the festival… I can’t say too much about what went on inside, except that it involved beer and food and as a visiting journalist I was fortunate enough to have my ‘secret bar’ experience with a group of VIP chefs…

If anything was going to get me into the spirit for my first ‘cold’ Christmas in the northern hemisphere, then this little getaway to Cornwall’s foodie capital was it. Thanks Padstow and now bring on the home-made minced pies and mulled wine, I’m in a festive mood!