“Don’t they have to see the landing strip to land? Those clouds are very low,” my husband, Paul, unhelpfully commented from the seat next to me.

On my lap, Owen gurgled and cooed, happily oblivious in his infant’s seatbelt strapped to my own. I clasped my arms around his waist and took deep breaths, while our Virgin passenger jet wafted side to side in the wind as it stepped towards the seemingly invisible runway.

On the ground our friends and hosts for the three weeks ahead, Jess and Chris Bray, were at home and unprepared for our arrival, certain the weather would prevent our plane from landing. It’s not uncommon for planes to be turned around – and for the previous few days they’d been hit by the outer edges of Tropical Cycle Joyce, which was battering the north-west coast of Western Australia almost 2000km away.

But land our pilot did, and the passengers exhaled a collective sigh of relief before we disembarked into the grey, humid tropical air of our destination.

Our home (and view) for the next three weeks.

Welcome to Christmas Island, a 135sq.km island of jagged limestone rock and mature rainforest in the Indian Ocean – technically an Australian territory, but closer to Indonesia by a long shot. The island is famous for the red crabs that carpet the streets during migration season, and infamous for its immigration detention centre. Settled in 1888, its approximately 1800-strong population is multicultural, made up of Chinese, Malaysian and Western residents, home to a Buddhist temple and Islamic mosque. The island’s main industry for most of its history has being phosphate mining, supported by tourism – an aspect which Chris and Jess hope to help grow. (I’ve embedded a video at the bottom of this post with more about their exciting project.)

Paul and I, with our seven-month-old son Owen, will be spending the next three weeks on this remote, tropical wilderness while Paul pitches in a helping hand for our friends’ ambitious project building a luxury ecolodge in the island’s national park – while I take my current day job of changing nappies, breastfeeding and facilitating naps to somewhere new and exotic, hopefully interspersed with some world-class snorkelling, rainforest walks, and wildlife spotting. 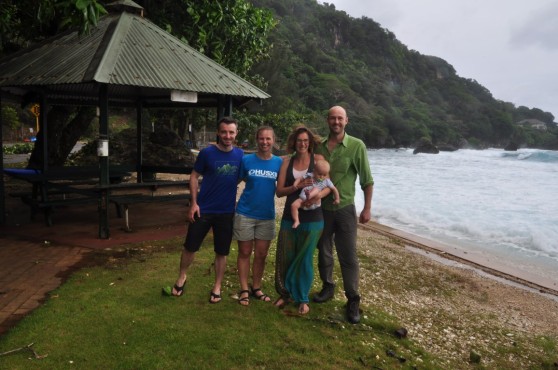 Checking out the uncharacteristic swell at Flying Fish Cove.

Snorkelling and swimming are on hold for the first few days, however. On our way from the airport we pulled into Flying Fish Cove – usually idyllic and calm, we watched enormous waves pound the coral beach and crash against the infrastructure of the island’s phosphate mine. It was apparently the biggest swell the island had seen in years.

Insect-sized baby red crabs crawled over our sandals and palm fronds and coconuts littered the roads. We drove through the township (called Settlement), past ramshackle houses, shops and apartment blocks, paint flaking off in sheets and metal rusting from the constant salty air. The town’s prized open air cinema was cancelled as the screen had torn in the wind. We arrived at our friends’ house (actually their friends’ – they’re house sitting), which is one of several 1940s weatherboard Queenslander-style homes lining the island’s north, with servants’ quarters from the colonial days, lofty ceilings and perpetually open windows and spinning ceiling fans. From the front deck we watched and listened to waves explode against the cliffs and seabirds ride the winds.

Paul, Owen and one of Christmas Island’s iconic red crabs.

Paul and Chris wasted no time heading out to check the site – Paul saw his first robber (or coconut) crab, enormous, forest-dwelling land crabs which can weigh up to 4kg (making them the world’s largest land invertebrate) and can climb trees. I stayed home and gave our tired little traveller a cool bath and managed to get him to sleep in his travel cot under the whirring fan. The boys eventually made it back, a little later than expected as they walked roads closed by carpets of baby crabs and the odd fallen tree, and we settled onto the deck for obligatory gins and tonic.

I’m writing this now back at the house, having breakfasted on egg roti and sweet coffee in the island’s Malaysian quarter (a weekend ritual of Chris and Jess that I’m excited to adopt while we’re here), while the others strategise the weeks ahead building Swell Lodge. 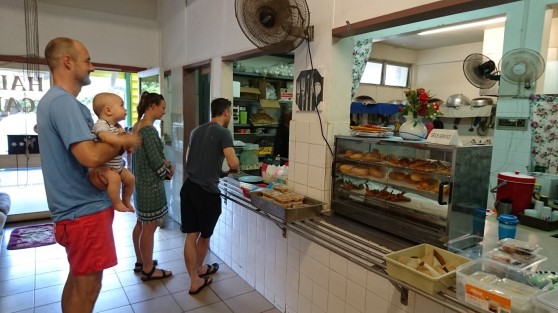 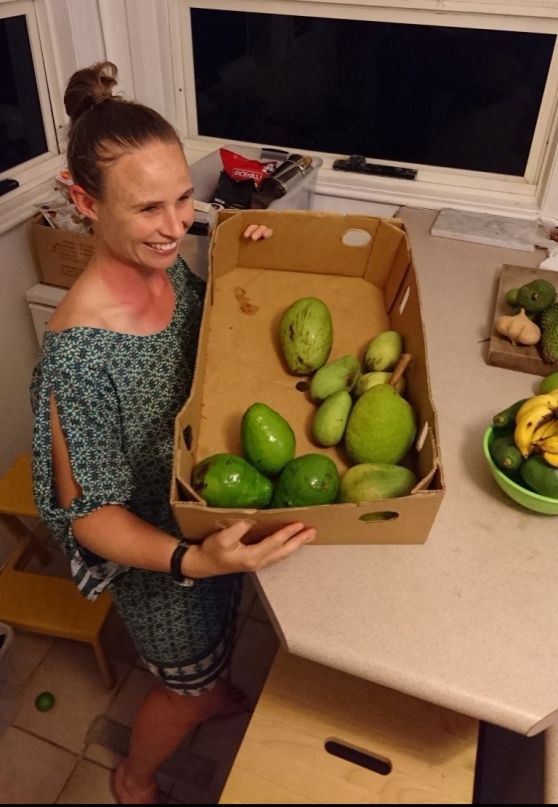 It’s been a long while since my last travel blog – there’s been a pregnancy and an infancy in between, and now a little boy who’s starting to look more and more like a toddler.

But now, the slow pace, humid air, and the vantage point offered in the ocean-facing deck here has alighted the spark for getting back into writing and it feels good.